The term “Holy Land” refers to any place that is considered sacred. All religions, beliefs, and cultures have sacred areas that they refer to as “Holy Lands”.

For the Christian world, the Holy Land is where all the religious and historical events of the Old and New Testaments came to pass.

It is the region occupying both sides of the Jordan River (Palestine, Israel, and Jordan), generally encompassing the territory from the River Jordan in the east to the Mediterranean Sea in the west, and from the Euphrates River in the north to the Gulf of Aqaba in the south, as well as the Sinai Peninsula (Egypt).

The region has spiritual meaning for Christians because it was here that the incarnation of the Son and Word of God took place, where Jesus Christ was born, lived, traveled, and preached, and where the first church was founded. 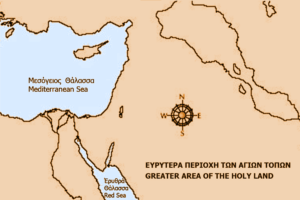 Map of the Greater Holy Land

Jerusalem is especially sacred because it was in this city that Jesus died on the cross and rose from the dead.

At the beginning of the 4th century A.D., with the recognition of Christianity as the official religion of the newly-founded Byzantine state and of the imperial court, the whole of Palestine was officially declared the Holy Land. The Emperor himself, Constantine the Great, provided the necessary means and money for the erection of the first magnificent churches in the Holy Land.

Saint Helena, the mother of Constantine, arrived in the Holy Land, where she established and oversaw the construction of the first churches. These include the Holy Sepulchre, the Calvary, the site of the Ascension on the Mount of Olives, the Cavern of the Nativity in Bethlehem, and others.

From the 4th century on, Byzantine emperors, patriarchs and bishops, ordinary monks, and faithful pilgrims started rushing to the Holy Land to visit and venerate the God-trodden land and to see all likely sites of religious relevance. Churches and monasteries were subsequently built on these sites and immediately turned into centers of veneration.

The Arab conquest that followed in 638 A.D., only a few years after the Persian invasion, made matters even worse. The number of Christians in Palestine diminished gravely, and monasticism in the desert vanished except for a few monasteries that continued to operate in the face of adversity.

Toward the end of the 10th century A.D., only a few main monasteries remained intact and active in the hands of Christians. The decisive intervention of Byzantine Emperors, as well as the persistent presence of the heroic monks of Orthodoxy, contributed to preserving the Christian and holy character of these sites.

The Crusaders’ conquest of Palestine and its return to Christian rule would temporarily make things better. The years that followed after the removal of the Crusaders and until the middle of the 18th century are characterized as the hardest and darkest in the history of the Holy Land. The Mamluks (1250–1516 A.D.), as well as the Ottoman Turks later (1517–1917 A.D.), took advantage of the holy sites and turned them into “merchandise” to be sold to the highest bidder.

In the year 1054 A.D., the separation of the Roman Catholic Church and Eastern Orthodoxy took place. Up until then, since the religious sites had been administered by the Eastern Church hierarchy, they remained Orthodox. Following the seizure of the Holy Land by knights from the West in the First Crusade (1099 A.D.), some sites passed from the Orthodox church to the Catholic church in the 12th century, although local Christians remained then (as now) predominantly Orthodox. With the defeat of the Crusader States and the administration of the Holy Land region passing to the Mamluks and the Ottomans successively, control of the religious sites oscillated between the Catholic (Latin) and the Orthodox (Greek) churches, depending upon which could obtain a favorable “firman” or “decree” from the Ottoman “Sublime Porte” or “central government of the Ottoman Empire” at any particular time.

Following various decrees from the Ottomans (firmans over who would control aspects of holy sites), those issued in the years 1852 and 1853 A.D. received international recognition in Article 9 of the Treaty of Paris (1856 A.D.), leaving the existing state of affairs, or “status quo,” intact. The term “status quo” was first used concerning the Holy Places in Article 62 of the Treaty of Berlin (1878 A.D.), an agreement that determines the ownership and rights of each community on the Holy Sites, and that has remained largely intact from the 18th century to the present.

“The Status Quo in the Holy Places,” a summary of the famous Treaty of the Holy Sites prepared in 1929 by Sir Lionel George Archer Cust (L. G. A. Cust), a civil servant during the period of British administration in Palestine (the British Mandate), quickly became the standard text on the subject as it is the best-known summary of the “existing state of affairs” or the “status quo” on ownership and rights of holy sites in the Holy Land areas.

The Greek Orthodox Patriarchate of Jerusalem

It historically traces its existence to the oldest church in Jerusalem, which was founded after the Crucifixion, Resurrection, and Ascension of Jesus Christ in the year 33 A.D. in Jerusalem.

The Patriarchate of Jerusalem is the earliest and most unique Apostolic Patriarchate, which, with its seat in the Holy City of Jerusalem, represents the uninterrupted history of the Church as a natural continuation of the first Church founded by Christ Himself.

This site uses cookies. By continuing to browse the site, you are agreeing to our use of cookies.

We may request cookies to be set on your device. We use cookies to let us know when you visit our websites, how you interact with us, to enrich your user experience, and to customize your relationship with our website.

Click on the different category headings to find out more. You can also change some of your preferences. Note that blocking some types of cookies may impact your experience on our websites and the services we are able to offer.

These cookies are strictly necessary to provide you with services available through our website and to use some of its features.

Because these cookies are strictly necessary to deliver the website, refusing them will have impact how our site functions. You always can block or delete cookies by changing your browser settings and force blocking all cookies on this website. But this will always prompt you to accept/refuse cookies when revisiting our site.

We fully respect if you want to refuse cookies but to avoid asking you again and again kindly allow us to store a cookie for that. You are free to opt out any time or opt in for other cookies to get a better experience. If you refuse cookies we will remove all set cookies in our domain.

We provide you with a list of stored cookies on your computer in our domain so you can check what we stored. Due to security reasons we are not able to show or modify cookies from other domains. You can check these in your browser security settings.

We also use different external services like Google Webfonts, Google Maps, and external Video providers. Since these providers may collect personal data like your IP address we allow you to block them here. Please be aware that this might heavily reduce the functionality and appearance of our site. Changes will take effect once you reload the page.